Although we in the thyroid world commemorate Graves for the first description of the disease which bears his name, his position in the overall scheme of medical history will forever be linked to that extraordinary group of physicians and surgeons who contributed to what has become known as the Irish School of Medicine which brought medicine in Dublin an international fame in the nineteenth century. Members of the group included physicians and surgeons (Stokes, Corrigan, Adams, Wilde) many of whom earned eponymous distinction. A truly remarkable group by any criteria. Graves’ great gift was as a clinical teacher. He prepared himself meticulously for this career by studying first in London then in Berlin, Copenhagen and Edinburgh. His proficiency in German lead to his arrest in Austria as a spy because no “Englishman” could speak German as well as he did. Apart from his clinical and linguistic skills, Graves was also a talented artist. On one of his trips to Italy Graves encountered and compared his work with a fellow traveller who turned out to be the acclaimed landscape painter Joseph Turner. His time abroad in particular his period in Berlin, where he studied infectious diseases under Hufeland stood him in good stead when he returned to Ireland where he found himself in the middle of a typhoid epidemic. This experience was put to great use in an attempt to stem the appalling death rate, about one million mainly fever related accompanying the Irish Potato famine of 1845-1847. Graves’ work at this time and in early epidemics led to his wish, conveyed to his friend Stokes that his epitaph might be “He fed Fevers”.

Despite his unselfish commitment to practicing medicine in Ireland, Graves’ family background would not necessarily endear him to the majority of the native Irish population; his ancestors were awarded land captured during Cromwell’s campaigns in Ireland. However as recounted by Drury (1985) citing Irish medical historian William Doolin, Graves “more than repaid us for the uninvited presence of his family among us “. Graves’ father Richard Graves was himself an outstanding scholar rising to be Regius Professor of Divinity in Trinity College, Dublin. Graves followed in his father’s footsteps, graduating with a BA degree and in the process being the Gold Medal Winner, at that time the highest student award. It was in the College Historical Society, founded by Edmund Burke, acclaimed as one of the greatest orators in the English language, that Graves honed the oratorical skills inherited from his preacher father. Graves entered medical school in Trinity College Dublin from which he graduated in 1818 and subsequently gained a licentiate from the Royal College of Physicians of Ireland, a college whose Presidency he eventually attained and where his lifesize statue stands to this day and is a frequent site of pilgrimage for visiting thyroidologists.

As previously stated Graves’ greatest professional attributes were his skill as a clinical teacher and his lectures in Sir Patrick Dun’s hospital were as recounted by Selwyn Taylor (1989) “ the talk of the town”. His contribution to the identification of hyperthyroidism, although accidental, was a product of this clinical skill. Graves account of three patients with three cases of tachycardia and thyroid enlargement in young women and added a fourth with severe exophthalmos who had been referred by a colleague, William Stokes. This work was published as part of the London Medical Society Clinical Lectures (1835). The author was of the opinion that the syndrome he described was of cardiac origin.

Carl A. von Basedow practiced medicine in Merseburg in Germany and described the coincidence of palpitation of the heart, exophthalmos and struma (goitre), the so called Merseburg Triad. To explain the changes in the tissues behind the eyeball, he evoked a cause mediated by some “dyscrasia of the blood” (Basedow 1840).

Although Basedow described many of the main features of what we now know as hyperthyroidism his publication was 5 years later than Graves despite having followed his patients for several years. Notwithstanding this later publication the disease is referred to as Basedow’s Disease in many non - English speaking countries. The other contender for being first to describe hyperthyroidism was Caleb Hillier Parry who practicing in Bath in England and who observed exophthalmic goitre in 1786 but his findings were only published by his son in 1825, three years after his death (Parry 1825). There is little doubt then that Parry was the first to describe the disorder which is now, at least in the Anglophone world, termed Graves’ disease. If this is so, why is it so called ? The explanation given by a number of biographers of Graves (Drury 1985, Taylor 1989, Coakley 1996, Sawin 1998) was that Graves had the unbidden services of an excellent French publicist to advance the Irishman’s case against that of the Englishman or the German. Armand Trousseau was Chair of Medicine in the Hotel-Dieu in Paris. He was a fervent admirer of both Graves and Stokes as clinical teachers and cited their work in his clinical lectures and publications (Trousseau 1868). When Graves’ textbook was translated into French, Trousseau wrote the foreword in which he commended to readers the work of Graves and indeed first used the term Graves’ Disease but Trousseau’s fellow countrymen in France did not follow his lead. There is little doubt that the predominance in publishing of the English language also contributed to Graves’ eponym. Thus hyperthyroidism of autoimmune origin gained and to this day retains in the anglophone world the title of Graves’ Disease. For years his image formed the masthead for the longest established thyroid association, the American Thyroid Association (ATA) Unfortunately the ATA chose to dispose of his image in favour of a “more modern” cartoon of a thyroid gland. 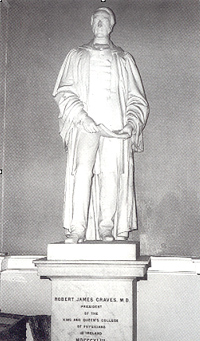 There has always been a lot of perhaps rather pointless, but invariably good humoured controversy tinged with nationalistic tones as to who deserved the appellation as the discoverer of “exophthalmic goitre”. Perhaps with modern knowledge “immunogenic hyperthyroidism” might be a less controversial title. It appears that Graves was unaware of Parry’s work or that Basedow was unaware of Graves’ contribution but Basedow did however quote Parry’s work. An excellent commentary on these questions is contained in work by the late Clark Sawin (Sawin, 1998).

Although Robert Graves received in his lifetime all the honours that his local medical community could bestow, his outspokenness in terms of criticising contemporary government health policies probably prevented his being awarded a knighthood. He was however honoured by being elected a Fellow of the Royal Society and an honorary member of many European medical societies. His personal life was not so fulfilled. He was married three times. Two of his wives predeceased him as did two daughters. Graves fell ill in the autumn of 1852 and died in his 57th year of an abdominal tumour on March 20, 1853.

A statue of Graves was unveiled in the Royal College of Physicians of Ireland in Dublin and in 1996 the 200th Anniversary of his birth was commemorated in the same college by a Graves’ 200 Celebrated Thyroid Meeting. The genesis of this was a conversation between the author and the late Wieland Meng who had organised a similar meeting in Halle in 1990 to commemorate “150 years of Morbus Basedow”. It seemed fitting that within the same decade the two pioneers of our discipline should be honoured in their respective homelands.

The excellent biographies of Graves by S. Taylor and D. Coakley were a source of much of the material in this essay. Photographs of Graves are reproduced by kind permission of the Royal College of Physicians of Ireland.