Andries Querido was born in 1912 in Amsterdam as son of a diamond cutter. In 1937, he obtained his MD from the Amsterdam University. Already as a student he was interested in research. A famous practical joke that he exercised together with his cousin, also a medical student in Amsterdam and having the same first and last name, was as follows. They faked a paper on a made up male patient who was diagnosed with the syndrome of "Uroptoë". All types of investigations that 'were performed' in this patient, 'confirmed' that urine from the bladder moved via a fistula to the lung and then was coughed up. The paper was put to rest to the relief of 'our' Querido, because in retrospect he was afraid of publishing the manuscript. He was shocked sometime later, when his cousin cheerfully told him that he had sent it for publication to the "Het Nederlands Tijdschrift van Geneeskunde" (The Dutch Journal of Medicine), that was being read by virtually all Dutch doctors. He became very worried and nervous about it and was thinking of retracting the manuscript. However before he could do this, a similar case was published in a South African medical journal quoting their publication! They left the situation as it was! In 1935 he was honoured by receiving the Golden Medal of the University of Amsterdam for his work on the need of vitamin D and its relation with calcium and phosphor in diet. This work resulted in his PhD thesis in the same year. After having worked for half a year in the United States in the laboratory of Verner McCollum, John Hopkins University Hospital in Baltimore, he returned to The Netherlands to work in the lab of Prof De Jongh. There he studied the effects of injected pituitary extracts and steroids on morphological changes in castrated or hypophysectomied rats and mice. In 1938 he worked in Paris with André Lwoff. There, he developed a sensitive method for the quantification of nicotine amide in blood using the bacterium Proteus -X 19. For the principle of using bacteria to measure metabolic processes, Lwoff (together with Monod and Jacob) received the Nobel Prize 1965. Lwoff offered Querido a staff position in his lab, but because of the outbreak of World War II, Querido decided to return back home. In January 1943 he and his family were arrested by the German occupation and transported to the concentration camp Theresienstadt in Germany. They were liberated in 1945 and the family moved back to Leiden.

In 1948, he was appointed professor of Medicine and Clinical Endocrinology at the University of Leiden. Querido is appropriately considered the 'father of endocrinology' in The Netherlands. He realized that for the pursuit of causes of diseases, notably in endocrinology, investigations should be focussed more on the study of metabolic processes rather than on morphology. The introduction of isotopes, the first being radioiodine (131I), was a great advantage to this end. His inaugural oration was entitled "The significance of pathophysiology in medicine". He favoured contacts abroad. He regularly cooperated with Russel Fraser in Hammersmith Postgraduate Medical School in London. He stayed one year as a Rockefeller Foundation research fellow in Boston at the Massachusetts General Hospital, with the famous thyroidologist Howard Means. There he developed a biological TSH test (1). This test was the first test to measure TSH using radio isotopes and for obvious reasons not comparable to the qualities of the tests of today.

Back in Leiden in 1950, he established an endocrinological clinic supported by a well equipped laboratory with ample access to experimental animals. He formulated a variety of themes for further investigation. These comprised amongst others, the parathyroid glands and its effects on bone formation using a microroentgen technique that they developed themselves, hypothalamic obesity in rats, thyroid function in experimental and clinical conditions, Cushing's disease and growth problems in children. In these years, various renowned foreign researchers visited Querido"s department amongst others John B Stanbury from Boston, He and Querido became close friends. In his remarkable book "A constant Ferment" (2) Stanbury stated about Querido "He and I resonated at once".

Together during Stanbury's stay in Leiden, they worked on the problem identified by them as "dehalogenase deficiency". They were confronted with a 27 year old male patient with a congenital goitre. The exciting story about their study, see below, is cited from "The Thyroid and its Diseases" by L.J. DeGroot and J.B. Stanbury, (John Wiley and Sons, New York, 1975, p. 548-49) and narrated by Stanbury :

"……. THE IODOTYROSINE DEHALOGENASE DEFECT
The authors' first patient was studied with Professor A. Querido and others of the Academisch Ziekenhuis, in Leiden, Holland. This patient was a man of 27 years (J. P.), who was found to have a goiter at birth. Thyroid medication was given for many years but was discontinued four years prior to his hospital entry. In the absence of thyroid medication the goiter increased relentlessly in size. The serum concentration of PBI was 0.5 1mcg/ 100 ml. His parents were not consanguineous and were normal, as was his older brother. A younger brother also had a goiter at birth and was retarded.

Radioactive iodine accumulated unusually rapidly in the thyroid, but after the first hour, the labeled iodine began to leave the thyroid and to appear in the blood as a component that was only partially precipitable with trichloracetic acid. Specimens of serum contained large amounts of MIT and DIT, and other components which proved to be metabolites and conjugates of these two amino acids. These substances are normally encountered only in trace amounts, or not at all, outside the thyroid.

It was postulated that the reason for the metabolic anomaly was an absence of dehalogenase in the thyroid and in all other tissues of the body. Upon testing, labeled diiodotyrosine administered intravenously was excreted almost quantitatively unchanged in the urine of this patient. When tissue slices became available at the time of surgery, no deiodinating ability was observed, whereas thyroid slices from normal thyroid glands and those with nodular goiter rapidly deiodinated mono- and diiodotyrosine. The authors have had an opportunity to study other similar patients, and other investigators, especially McGirr and his coworkers, have also found an identical metabolic defect in their patients. …"

See for their most important publications on this work, ref 3 -5. McGirr at al had previously described these patients clinically (6) but described its cause with similar results in the same year of 1956 (6,7).

In 1962 Querido became interested in endemic goitre. He was invited to join in a goitre survey by Dr M. van Rhijn, who, on behalf of the Dutch government, was stationed in former Dutch New-Guinea, now Irian Djaya, Republic of Indonesia. He and some of his co-workers did fieldwork there and reported on their iodine studies showing severe iodine deficiency and cretinism (8,9) …."

Querido and Stanbury joined in several endemic goitre studies, notably in Latin America, during the years that followed and had a global leading role in its pursuit and treatment. Their observations, shared with those of Delange and DeLong, significantly contributed to the understanding of endemic cretinism as expressed in their neurological and myxoedematous types. Querido and co-workers also carried out studies in endemic goitre areas in Kenya and Indonesia (10,11). Together with R. Djokomuljanto form the Diponegoro University in Semarang, Republic of Indonesia, who initiated the Indonesian studies, he started iodine prophylaxis by administration of iodized oil injections. In 1963 Querido accepted a visiting professorship at the All-India Institute for Medical Science from the Rockefeller Foundation for half a year, where he had the time to reflect on modernisation of medical education. 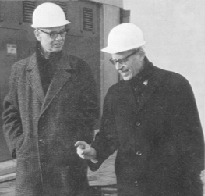 
In 1965 Querido's career took quite another direction, when he was assigned by the Dutch government to found the Medical Faculty in Rotterdam.

With great vision and leadership and with mostly Dutch top academics from The Netherlands and abroad, he started the adventure. He had the mandate of full single power over this enterprise.

Already in 1966 the School started with its first year students in the basic sciences. Every year he managed to have the next year ready so that after four years the students obtained their doctorate and after 6 years their MD. The opinion of Querido was that the school should have a strong basic sciences structure envisaged to "fertilize" clinical research.

Very soon after its start, the School produced high quality basic and clinical research and functioned well as a top academic hospital. Looking back it is very difficult to imagine how one person could achieve all this in such short a period of time. It is the conviction of this author that, at that point in time, only Querido could make this happen!

In 1971, he returned to Leiden and involved himself more intensely than before with national committees for the improvement of medical education and research and national health. Also in these areas he played a crucial role that resulted in true innovations in these areas. He retired in 1983, but stayed active in many fields and was consulted by many. He passed away at the blessed age of 88 years.